PGConf.EU is a unique chance for European PostgreSQL users and developers to catch up, learn, build relationships, get to know each other and consolidate a real network of professionals that use and work with PostgreSQL.

Migrating data from another RDBMS to PostgreSQL should be really easy. After all it’s all relations and tables and the same data types everywhere or abouts, with text, dates and numbers. Well it’s actually quite messy and complex to migrate the data properly from one system to another. pgloader solves this problem and turns it into a one-liner: in this talk you’ll learn how to benefit from that, and the classic pitfalls to avoid.

If you were not present at PGConf.EU in Warsaw, you might still want to read the following slide deck: 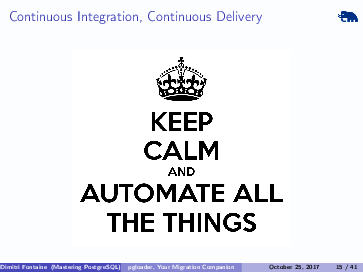 As far as I know, we don’t have a video recording of this talk, sorry.

This video is a Lightning Talk I gave at the European Lisp Symposium, where I introduced why pgloader is now written in Common Lisp rather than in Python like before.

Spoiler alert: that’s because Common Lisp allows for a much faster program (both runtime and time spent writing and fixing the code), and a host of new features that I could not have developed in Python in any comparable amount of time…